What is Polygon (MATIC)?

What is Polygon (MATIC)?

Polygon is a network of secure Layer 2 (L2) solutions and autonomous sidechains. It aims to increase Ethereum scalability and reduce transaction costs. In addition to its own developments Matic PoS Chain and Matic Plasma Chains, Polygon will support Optimistic Rollups, ZK-Rollups and Validium.

Who created Polygon and when?

The platform’s test network went live in October 2017 under the name Matic Network.

The project has four co-founders:

The founders see Polygon as a solution to the problems of scaling and increasing the efficiency of blockchain networks.

The Polygon team created the Plasma Chains scaling model and the Ethereum Matic PoS Chain sidechain based on Proof-of-Stake (PoS). Over time, this sidechain has become a popular scaling option for various applications.

In April 2019, the company conducted an IEO of the MATIC token and raised $5.6 million. In February 2021, the developers of Matic Network changed the name of the project to Polygon. The rebranding was timed to coincide with the transition from a second-tier Ethereum blockchain solution to a multichain system similar to Polkadot.

What are the technological features of Polygon?

The central component of the Polygon ecosystem is the modular Polygon SDK, which allows developers to create decentralized applications and any element of network infrastructure.

Standalone networks rely on their own security – for example, using Proof-Of-Stake or Delegated Proof-Of-Stake consensus models. Such networks are independent and flexible, but it is these features that prevent them from achieving an acceptable level of security. For example, PoS requires a large number of robust validators. This model is suitable for corporate systems and large projects with strong user communities.

Secure networks use a “security-as-a-service” model. It works either directly by Ethereum, such as through the “fraud proofs” [fraud proofs] that Plasma employs, or through a pool of validators. In the Polygon ecosystem, validators can be used by different projects. This model is similar to Polkadot’s collective security mechanism.

Secure networks ensure a high level of security, but at the cost of independence and flexibility. This model is usually preferred by privacy-oriented projects.

The Polygon architecture consists of four abstract and component layers: 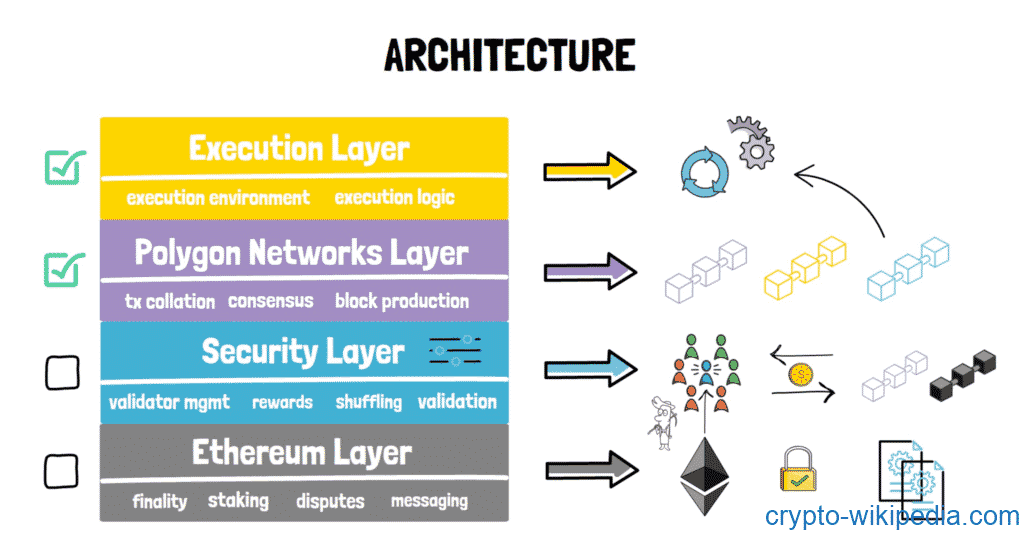 This is another optional layer that can enable the validators-as-a-service model. This feature allows Polygon-based systems to use a set of validators that can periodically check the validity of any of the system’s networks in exchange for a reward.

The security layer is implemented as a metablockchain that runs parallel to Ethereum and is responsible for managing the validators – registering, distributing rewards, shuffling and validating Polygon Chains.

The security layer is abstract and can have many implementations with different characteristics. This layer can also be implemented directly on Ethereum and use its miners as validators.

This is the first mandatory layer in the Polygon architecture. It consists of sovereign blockchains, each supporting transaction matching, local consensus and block creation.

This layer is responsible for interpreting and executing the transactions included in Polygon blockchains. It consists of sub-layers of execution environment and execution logic.

Matic Plasma Chains is an implementation of the framework for creating scalable, decentralized Plasma applications. This second-tier solution was originally proposed by Joseph Poon and Vitalik Buterin.

Matic PoS Chain is a sidechain that runs parallel to the Ethereum blockchain. Matic PoS Chain uses the Proof-of-Stake consensus mechanism and its own set of validators.

What is Polygon’s consensus mechanism?

Heimdall (validator layer) supports all validation nodes (stackers) that run parallel to the Matic stacking contracts and manage validator accounts, ensure that funds are removed from the stacking and release rewards.

Heimdall runs on the Tendermint engine, which has modified data structures and signature scheme. It is responsible for validating blocks, running a block creator selection committee, and overseeing the implementation of sidechain blocks in Ethereum. Heimdall aggregates the blocks created by the Bor layer into a Merkle tree, and periodically publishes the Merkle root in the root chain.

With the Polygon SDK, developers can create or connect blockchains based on the L-2 platforms Plasma, Optimistic Rollups, ZK-Rollups and Validium with the Matic POS sidechain and its counterparts. The Polygon SDK is under development.

What role does the native MATIC token play in the Polygon ecosystem?

The total supply is 10 billion MATICs.

MATIC is used as a means to pay transaction fees and settlements between members of the Polygon ecosystem.

Matic’s sidechains come to consensus using a Proof-of-Stake-based layer, in which members of the network stack MATIC tokens. Block validation, proof publishing, and other operations require computational resources. MATIC inflation allows the providers of these resources to be rewarded.

MATIC issuance is staggered, according to a schedule that runs through December 2022.

In the future, MATIC tokens, originally created to raise funds for project development, will play the role of a system security mechanism and a means of decentralized management of Polygon platform development.

What are the benefits of Polygon?

The Polygon architecture is feature-rich. It allows other applications to choose the optimal scaling solution that best suits their needs.

For example, a DeFi-protocol that intends to store billions of dollars locked up in smart contracts will likely want to increase security at the expense of sovereignty. It is likely to opt for Ethereum’s base layer.

An NFT marketplace seeking to reduce transaction costs will be willing to sacrifice security in part. Such a project would choose the Security Layer with its set of sharing validators.

The developers of the gambling application can leverage their own consensus mechanism with a high block creation rate. They can abandon the Ethereum base layer and the Security Layer entirely, focusing on the Polygon Network Layer.

Application teams can move from one scaling solution to another when a project changes or a better scaling option becomes available. The project architecture allows the different Polygon-based scaling technologies to interact rather than remain isolated.

Unlike tier-one blockchains such as Polkadot, Cosmos and Avalanche, in the Polygon ecosystem, the Ethereum blockchain is the main connecting hub. This allows the project to rely on a strong community of users and developers, the popular Solidity programming language, and the Ethereum Virtual Machine (EVM).

How is Polygon evolving?

More than 1 million addresses have been created on Polygon. There are over 80 million transactions per day. More than 50 digital assets have been released based on the project’s own PoS blockchain, including MATIC, Tether USD (USDT), USD Coin (USDC), Quickswap (QUICK), Dai Stablecoin (DAI), Chain Games (CHAIN).

Many projects have either migrated to Matic PoS Chain or are in the process of doing so – Decentral Games, SportX, Easyfi, Neon District, 1inch Network, Quickswap, Uniswap, SushiSwap, Aavegotchi, Polymarket, Polkamarkets and Superfarm. Polygon support will be added by The Graph and Chainlink. The project also announced a partnership with a major player in the video game industry Atari.

In May 2021 Polygon joined Mark Cuban Companies, a list of companies that billionaire Mark Cuban supports. The amount of the investment was not disclosed.

The project ecosystem is growing rapidly – in the DeFi Pulse ranking, the Polygon project ranks fourth in terms of the total value of blocked funds in the protocol.

Add a comment Cancel reply
👍 Best of the week
You may also like
What is Harmony (ONE)
Main Harmony is a high-performance blockchain platform
37
What is Curve?
Curve Finance is a decentralized exchange with automated
29
What are stabelcoins?
The main thing about stabelcoins Stablecoins are cryptocurrencies
31
What is Terra (LUNA)?
What is Terra? Terra is a blockchain platform designed
1.1k.
What are crosschain bridges?
What are crosschain bridges? They are decentralized
89
What is Aave?
What is Aave? Aave is a lending DeFi protocol that
636
What is Cosmos?
What is Cosmos? Cosmos is a decentralized, scalable
519
What is PancakeSwap? Binance Smart Chain Uniswap Analog Review
What is PancakeSwap? It is a non-custodial Binance
347