What is Pump & Dump? In simple language

What is Pump & Dump?

Pump and Dump – a manipulative scheme for increasing the cryptocurrency exchange rate followed by a price collapse. Large owners of assets artificially increase (“pump”, pump) their value in order to subsequently sell (“dump”, dump) the most expensive for small traders. As a result, the value of the asset is reduced, and investors lose money.

Disclaimer: This material is published for educational purposes only and does not constitute an appeal to participate in investment schemes or instructions for their organization.

The pump & dump scheme appeared on the securities market long before the advent of cryptocurrencies. The first documented episode of such fraud was the scam of the British trading company of the South Sea, which at the beginning of the XVIII century overstated the stock price with false promises of profit. This led to the emergence of the so-called bubble of the South Sea.

Subsequently, pump & dump was widely used on the American market of “junk” or “cheap” stocks (cheap securities with low market capitalization) during the Great Depression in the late 1920s and early 1930s. XX century. Then brokers sold each other cheap stocks, which led to increased demand and higher prices, after which stocks were thrown into the public market. In the USA, such a practice was recognized illegal. The heyday of pump & dump schemes in the stock market came in the early 2000s.

During the existence of cryptocurrencies, tens of thousands of pumps took place. According to experts from Imperial College London, at least two fraudulent schemes of this kind are implemented every day, and the organizers have a monthly profit of $ 7 million on average.

How does Pump & Dump work?

Having chosen a stock exchange and a coin, the organizers buy tokens in small portions so as not to provoke a premature rate appreciation. As a rule, these are little-known cryptocurrencies with low capitalization, popularly known as shitcoins. Sometimes relatively large cryptocurrencies are also used for pump & dump.

After buying the token, the pump begins – its “pumping”. In messengers, news feeds, social networks and exchange chats, an upcoming exchange rate is announced and the name of the exchange platform is announced, where the organizers of the scam through their bots place and collect large orders for the purchase of the token, raising its quote. This is the first wave of the pump.

Most major bitcoin exchanges limit such activities, and the coins in their listing are rarely suitable for the implementation of the scheme. But there are popular sites that support more than two hundred coins – they attract scammers in the first place.

To warm up buyers, false informational messages about partnerships, investments, or technological updates are used. Paid “experts” are connected to the disinformation campaign. “Sensational” information is distributed mainly through Telegram channels. However, most of these channels directly report on the pump, promising profit.

After that, investors are sure: since they know about the pump in advance, they will be able to earn money. In fact, they are already victims, and some of them even pay for subscriptions to such pump channels. 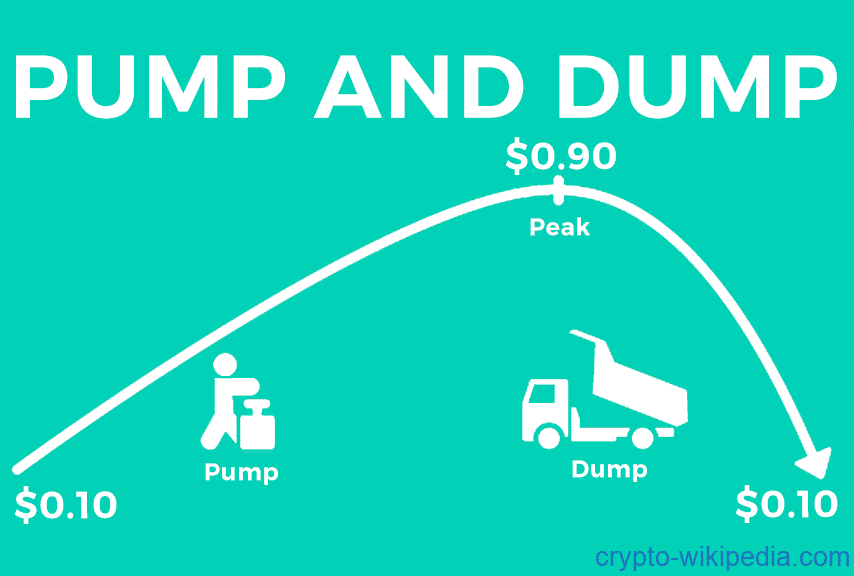 In the event of a successful advertising campaign, the second wave of the pump begins – third-party investors come who independently influence the rate growth. Amid the hype, the price rises, the organizers sell tokens at inflated prices, after which the cryptocurrency exchange rate returns to its original level.

What are the types of Pump & Dump?

Cryptocurrency pamps are divided into long-term and short-term.

What are the hallmarks of Pump & Dump?

Can I make money on the Pump & Dump scheme?

It is almost impossible to make money on a short-term pump: profit is possible only for the organizers, ordinary traders simply do not have time to react. Accordingly, it makes no sense to subscribe to the pump-channels in Telegram with an audience of several thousand people.

It is theoretically realistic to make money on a long-term pump: a trader can count on profit, however, even in this case he has a few minutes to place an order. Moreover, the probability of loss is equal to the probability of profit.

Most pumps have one predictable feature: after the first collapse, there is a new short-term growth due to the fact that retail investors are involved in trading. After a trader at a loss sells tokens during the collapse period, he can buy them at a minimum and sell them during the second lift.

In no case can you buy coins during the second rise – this is a guaranteed loss. Secondary price peaks are typical only for large enough coins with a capitalization of at least a million dollars.

On the night of November 5, 2019, the price of the ParallelCoin token in a few hours increased thousands of times (from $ 1.60 to more than $ 2200), which gave users the opportunity to talk about the emergence of a “new bitcoin”. A few hours later, the price returned to the level of $ 2.

Ladies & gentlemen.. we have the new Bitcoin 😂

On June 26, Chainlink reported that the token was included in the Coinbase listing, after the token price rose to $ 2.24. The pump began on June 28: several addresses bought large quantities of LINK on Binance, after which they were transferred through a series of fake addresses. By June 29, the LINK price rose to $ 4.45. According to observers, the daily trading volumes of ChainLink on the Binance exchange at the end of June were artificially boosted. So, with a capitalization of only $ 1.4 billion, this figure amounted to $ 863 million. According to some, the price movement chart for the mentioned period looked unnatural, especially considering that volumes in favor of sales were recorded on one of the green candles. There was a possibility that the unknown wanted to provoke FOMO, but could not achieve the goal.

On July 2, the dump phase began: the addresses that previously bought the tokens began to be reset, after passing through the chain of fraudulent addresses. Only one of the addresses from July 2 to July 15 sold 4.2 million LINK tokens. On the very first day of the “dump”, July 2, the cost of the token dropped to $ 3.73.

On July 6, a recruitment report was posted on the project’s Twitter page, which, according to some observers, indicated a dump. Following this message, a schedule was circulated on social networks showing the alleged token sales of 700,000 LINK at each price rebound after reaching a peak at the end of June. After going through a small chain of addresses, these tokens were sold on Binance. Some believed that the message about the expansion of the staff was only an attempt to hide the massive liquidation of tokens. 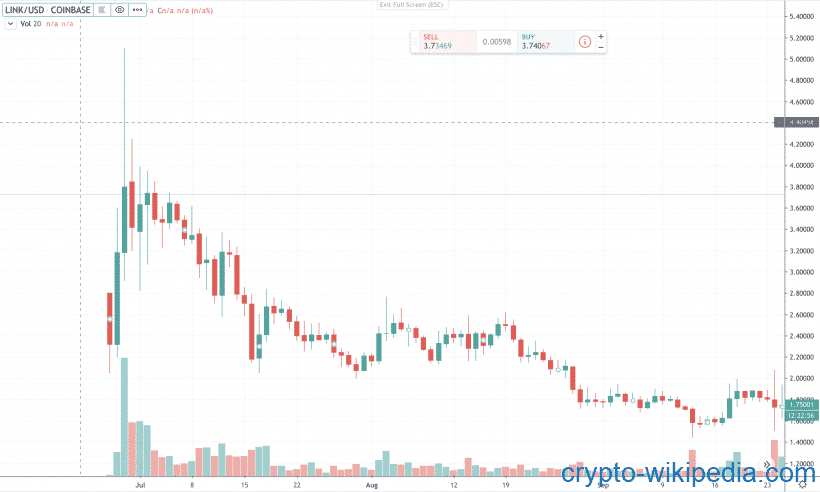