What is TON (Telegram Open Network)?

Telegram Open Network (TON) is a new generation peer-to-peer multi-blocking system with built-in Gram cryptocurrency (GRM) from Telegram developers.The goal of the creators of TON is to surpass existing blockchain projects, including Bitcoin and Ethereum, in speed and scalability. They plan to achieve this through the use of the Proof-of-Stake (PoS) consensus algorithm, Byzantine Fault Tolerant protocol, sharding technology, and intelligent routing mechanisms (Instant Hypercube Routing).

The project first became known at the end of 2017, however, in fact, Telegram confirmed its participation in the development of TON only in the fall of 2019. Nikolai Durov, who took over the technical part of the launch of VKontakte and Telegram, describes TON as a “huge distributed supercomputer or super-server” for many services.

What is a Gram?

Gram (GRM) is the internal currency of the TON network. It is assumed that you can use it:

on the market of paid content and subscription services (on the bot platform, in groups, channels and on the Telegram advertising exchange);
for staking and payment of commission (gas) to network validators for transaction processing;
payment for goods and services in all components of the TON system.
According to the project documentation, the issue of coins will be 5 gigrams (5 billion) Gram.

The initial Gram offer was held in accordance with Rule 506 (c) of the US Securities and Exchange Commission (SEC), and so far the project has not issued tokens. Currently, the regulator considers GRM a security. SEC claims that the offshore companies TON Issuer and Telegram Group violated the Law on Securities, in particular the provisions of sections 5 (a) and 5 (c). According to the agency, the companies sold 2.9 billion unregistered digital tokens for $ 1.7 billion to 171 investors in the United States and beyond.

In October 2019, the SEC through a court secured a temporary ban on the distribution of tokens. In this regard, the developers postponed the launch of TON on April 30. In February 2020, the court extended the ban indefinitely. Telegram disagrees with the legal position of the Commission, and none of the companies intends to maintain control over TON after the launch.

Another regulator – CFTC – said that digital currencies are a commodity, and TON developers are asking to recognize their token as such. Commodities are not subject to SEC jurisdiction, but many securities have the properties of commodities, which often makes it difficult to determine legal status.

We will find out the unequivocal answer to the question whether Gram is a security, based on the results of the SEC lawsuit against Telegram, and we will supplement this block.

What does TON consist of?

The TON system includes several components that are integrable with third-party applications and messengers, the first of which should be the multi-block platform TON Blockchain. Access to it will be provided by the use of the TON peer-to-peer network (TON P2P Network). TheTON Service will become a platform for third-party services, decentralized applications and smart contracts.

TON DNS will simplify access to services, smart contracts, nodes and accounts by providing them with human-readable names.

TON Storage will allow distributed storage of files on the TON network and access to them via smart contracts, which will remind many of them how IPFS and Filecoin work. Also in this repository will host the TON Blockchain archives.

The TON Proxy anonymizer will ensure anonymity and confidentiality of operations on the network by hiding the identifiers and IP addresses of nodes, and together with other components of the system, an effective censorship bypass.

The TON Payments platform will provide users with the ability to instantly transfer funds and make payments without registering on the blockchain and without paying a commission.

At the time of the expected launch of the main network, the TON wallet will be available as a standalone application without integration with Telegram Messenger. Developers do not rule out the possibility of such integration in the future, but its depth depends on regulatory barriers.

How is the TON Blockchain structured? (if you are not a developer, you can skip this block)

TON Blockchain is essentially a collection of blockchains made up of smaller blockchains. The TON Blockchain design assumes that all data in blocks and statuses are presented as organized in cell trees or directional acyclic graphs (DAGs) of a bag of cells, consisting of 1023 data bits and containing up to four links to other cells. TON Blockchain architecture assumes the presence of the main blockchain – Masterchain, as well as up to 292 additional blockchains. This approach will make the system flexible to change and minimize problems associated with the growth of the size of the main chain. 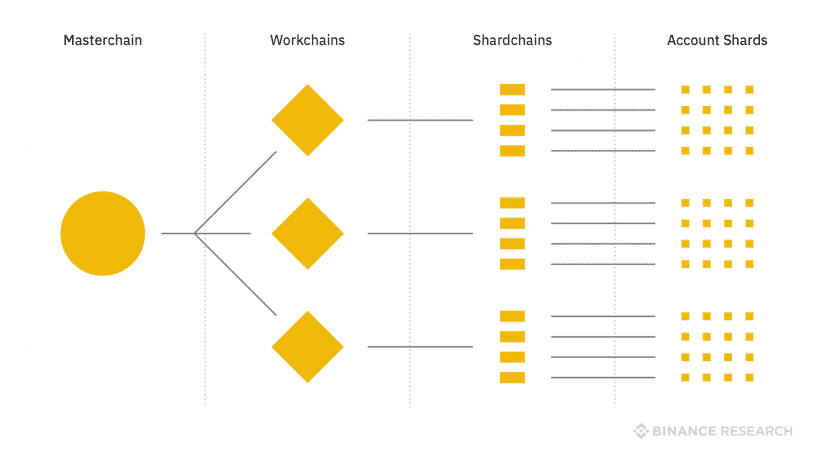 Masterchain is responsible for the operation of the entire system, including storing block hashes, information about validators, coin issues, status of workchains, etc.

The task of a blockchain of the Workchain type is to support the functioning of up to 232 virtual workchains (working blockchains), divided into shards. Workchains are responsible for executing Turing-complete smart contracts created in the new programming language Fift, have their own virtual machines (TVMs) and identifiers, and include up to 260 shards.

Any community member who is willing to pay a high commission for publishing his specification in a transaction on Masterchain and who has received the approval of network validators can create and activate a workchain. Today, the identifier has only the main working chain (Workchain Zero, workchain_id = 0), which works with TON smart contracts and Gram transactions.

Shardchain provides system scalability. It is assumed that due to the introduction of the “Infinite Sharding Paradigm”, TON blockchains can be automatically divided and combined depending on the network load, providing high data processing speed and low fees.

Shardchain includes many small virtual blockchains – Accountchain, containing outgoing and incoming messages of the account, which can have senders and recipients both inside the TON system and outside (for example, TON users will be able to receive and send funds from blockchains of Bitcoin, Ethereum and others) .

How does the TON Blockchain work?

It is expected that in the main TON chain there will be no more than 100 validators – the owners of the nodes, depositing significant amounts in Gram (steaks) in order to be able to generate and confirm new blocks. After every 1024 blocks, the group of validators associated with a particular shard will change pseudo-randomly. The group’s mission is to reach consensus on adding a new block to Shardchain. For this, validators receive and share among themselves a commission for conducting a transaction and new coins issued. If an invalid block is added, the validator can be punished by automatically reducing the size of its steak or by temporary exclusion from the validator pool.

After generating new blocks in Shardchain, upon reaching the BFT consensus of all validators, a new block is generated in Masterchain. It includes hashes of the latest shardchain blocks and makes all previous blocks canonical. Thus, without waiting for 20 confirmations, the transaction concluded in Shardchain can be used already in the next shardchain block.

For more information on the Catchain Consensus Protocol, see the documentation provided by Nikolay Durov.

How to mine cryptocurrency in TON?

In TON, it is not the miners, but the validators who are responsible for generating new coins. To obtain this status, you need to purchase and install several high-performance servers and gain access to a fairly powerful Internet connection. More precise parameters and requirements for validators will be published before the start of the project. Node owners can increase the validator’s steak and get an appropriate share of the reward for this when adding new blocks to the network.

Another way to earn cryptocurrency in TON is to search for errors in the system as a “fisherman”.

You can get cryptocurrency in the role of a collator node, which offers validators new blocks to add to the shardchain after checking their status, the status of neighboring shardchains and suitable Merkl evidence. However, this feature will not be available at an early stage of project implementation.

What currencies will the TON Blockchain support?

The main cryptocurrency of the Workchain Zero blockchain will be Gram. However, in theory, TON Blockchain can support 232 cryptocurrencies – just as many virtual workchains can function in Masterchain. Each workchain assumes its own main cryptocurrency and several additional ones. If the workchain charges a fee for transactions in its own coins, its creators should consider introducing a smart contract to automatically convert funds to Gram.

What are bitcoin futures?
What are futures? Futures is a contract to buy or sell
070