What is TRON, and what is its purpose?

TRON is an open-source blockchain protocol designed to deploy a decentralized ecosystem with simplified mechanisms for creating and placing entertainment applications and content on the network that users can share without intermediaries. At the same time, for the placement or sale of content on the network, a reward is supposed to be in the native cryptocurrency of the project – Tronix (TRX), and the platform itself is capable of supporting blockchains and smart contracts of other projects.

Who is behind the TRON project?

TRON is led by young Chinese entrepreneur Justin Sun. Since its activity significantly affects the market and the price of TRX, it is often called a marketing genius, and the project itself is criticized in terms of centralization. Having received an education related to history and economics, Justin Sun began his acquaintance with the cryptocurrency industry in 2012, investing in bitcoins. Then he worked as a representative of Ripple in China and launched one of the most popular mobile applications for voice streaming among Chinese youth, Peiwo (from Chinese “call me”). He became the first millennial student at the university, launched by Alibaba co-founder Jack Ma, and in 2015 and 2017 entered the Forbes “30 to 30” lists in Asia and China. Then, in 2017, San created the non-profit organization TRON Foundation in Singapore, with the help of which he attracted 15 thousand bitcoins for ICOs for his undertaking – 40% of the estimated 100 billion issue of TRX tokens. At the same time, 15% of the coins were distributed on pre-sale, 35% went to the reserve fund of the project, and 10% went to the Peiwo fund. In 2018, the TRON Foundation acquired BitTorrent for $ 140 million – its uTorrent application generates about 3% of daily Internet traffic every month. The company also decided to launch its own version of IPFS – BTFS. Justin Sun often uses aggressive marketing, and around his person is full of controversy. Thus, after analyzing the TRON whitepaper, IPFS creator Juan Benet noted that a significant part of the document was copied from materials of other projects, including his own, or contains basic information about the operation of p2p systems, presented as something original. Vitalik Buterin, co-founder of Ethereum, also accused Justin of Sun of plagiarism. He also said that he would “lose hope for humanity” if Ethereum bypassed not some other developing blockchain project, namely TRON. 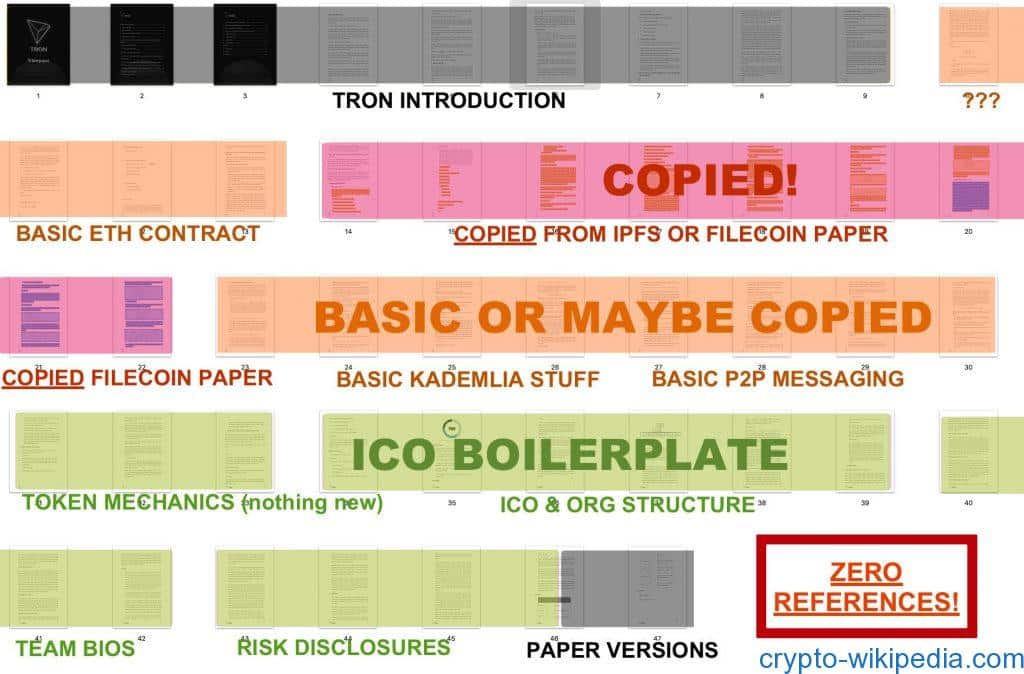 How does TRON work?

There are three levels to TRON architecture: storage, core, and applications. The first of them, in addition to storing network blocks and statuses, provides for the use of an open source GRPC-neutral framework and language-neutral framework for remote procedure call. At the kernel level, consensus, smart contract and account management modules have been implemented. And at the application level – the ability to create decentralized applications not only in the main protocol language (Java), but also in others, including Scala, C ++, Python and Go, and with support for the Protobuf structured data serialization protocol.

How is the project developing?

The project roadmap for 2017-2025 provides for six stages. In the first phase (Exodus), the main objective of the TRON hypermedia peer-to-peer platform was to provide a simple and decentralized file exchange, which made it similar to IPFS. The project started on the basis of Ethereum, and in 2018 switched to its own blockchain, celebrating Independence Day by burning 1 billion TRX ($ 50 million). Started with the launch of the main network, the second phase (Odyssey) is dedicated to expanding the community of creators of entertainment content. The third and fourth phases (Great Voyage and Apollo) will be associated with the launch by the participating projects of the network of new tokens and the conduct of personal ICOs. The fifth phase (Star Trek) will begin with the launch of a decentralized platform for games and market predictions. The final phase (Eternity) will address the issues of fundraising and monetization of projects on the platform.

What are TRX, TRON Power and TRON20?

The native cryptocurrency of the project (TRX) is the main means of exchange in the TRON network. TRON20 tokens are intended for developers: with their help, it will be possible to issue coins on the platform for their own applications. And for the TRON Power tokens (TP) that become available when TRX is blocked, users acquire the right to vote on network development issues.

How is TRON different from Ethereum?

Technologically, TRON is the main competitor of Ethereum and EOS, quickly expanding its user base and quite aggressively clears its place in the cryptocurrency market, luring developers of these projects to “save them from the collapse” of platforms. Since TRON started on the basis of Ethereum and followed its development path, the virtual machine (TVM), smart contracts and TRON token standards are compatible with Ethereum, which simplifies the migration of projects to this blockchain. Unlike Ethereum, where, according to Justin Sun, “miners are fighting developers,” TRON uses an algorithm for consensus based on delegated proof of stake (DPoS), that is, the separation of functions of coin holders with voting rights and transaction validators.

How is TRON different from EOS?

Both projects use the DpoS algorithm, but on EOS this is the version of the DpoS pipelined BFT (Pipelined Byzantine Fault Tolerance). Thanks to this, the time for generating a new block and confirming a transaction in the network is shorter, and the total time for confirming the result is longer than for TRON. However, project migration between blockchains is problematic. Justin Sun directly talks about this to EOS application developers, advising them at the start to decide which of the two platforms to connect the future with. Validators are responsible for verifying transaction data and creating new blocks in the TRON network – 27 Super representatives selected by TRX holders. At the same time, unlike the EOS network, where the block manufacturers are elected without the possibility of buying votes, such a practice exists in the TRON system. Super-representatives can send all remuneration they receive for adding a new block to the blockchain to purchase votes, and in addition to maintain control over the network.

What are bitcoin futures?
What are futures? Futures is a contract to buy or sell
044